Article #7
Pottery can tell us where early settlers lived and something about them. Although archeology cannot give absolute dates, it can contribute relative dating. Much good work has been done in and around Iran to provide us with a picture of the people who lived in the years before Babel and to the east of it. Several types of early pottery have been found in the East, which is now Iran. Although these were prehistoric times, before writing, pottery is still able to show us how several nomadic families or small tribes left evidence of their presence over great distances. What are the facts? 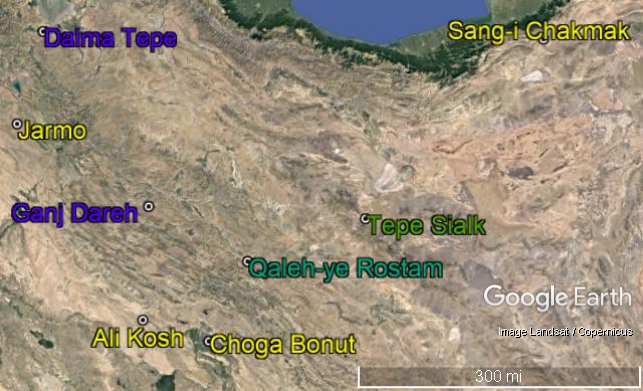 One early pottery type began at Dalma Tepe on the southern shores of Lake Urmia. This is where we would expect the first stop of the eastern migration of the children of Ham to be, after leaving the mountains of Ararat. This also happens to be where archeologists have found the oldest cultivation of grape vines. Dalma ware can be found for two hundred miles to the east, west, and south of Dalma Tepe. This shows a family of nomads that traveled widely and enjoyed their favorite campsites between grazings.

Another pottery type that existed before Babel is called Archaic Susiana. It was found at Choga Bonut, near Susa, but also identifies with artifacts at Ali Kosh, Jarmo, and Sang-i Chakmak, which is five hundred miles away. These appear in yellow on the map. This pottery type identifies settlements that were very similar to each other but hundreds of miles apart, which has mystified archeologists. At the same time, people with different pottery and culture lived between them and close to them. All these cultures seemed to have been on friendly terms, even though they maintained their distinctiveness. We also know there was a highly developed trade network because Jarmo had obsidian from mines in Turkey and sea shells from the Persian Gulf. Those are the facts. How can they be explained?

Popular thinking, which has taken shape in my lifetime, theorizes that man remained the same for a million years until his brain became big enough that people suddenly invented dozens of different pottery types all over the Middle East. Since it would have taken time for primitives to invent pottery, this revolution is spread over thousands of years. But this theory has problems with the facts. Why wasn’t there pottery is Africa where man was supposed to have begun. Why not Europe or Eastern Asia? Why did it happen so quickly? Did they all invent it separately or did someone share the idea of making a clay pot? If one person invented pottery, why didn’t everyone copy the same style? It makes little sense that styles, such as Samarran, would be so strictly defined and yet overlap with another strictly-defined style, such as Halaf. 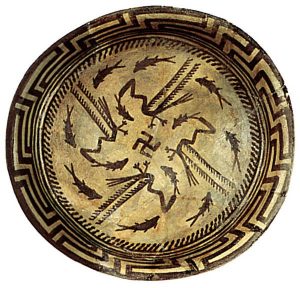 What does make sense is that all the children of Noah would have been privileged with the knowledge of ceramics, whether they chose to make pottery or not. About seventy family groups are mentioned in Genesis, which later developed into nations. We would expect friendly cooperation between everyone and also strong cultural identity within each tribe. Only the Biblical view explains why pottery began in the Near East and had such a diversity of culturally distinct pottery types. It came from families and tribes that were multiplying and expanding.

The first pottery shows multiple distinct families or tribes spreading out from a central area in the Fertile Crescent. Interestingly, there were three initial pottery types: Hassuna, Samarra, and Halaf. It may just be a coincidence, but we would expect to find three strong cultures coming from Noah’s children, Shem, Ham, and Japheth. Then a new pottery type sprang up and overtook the others. This was Ubaid pottery from Eridu. A cultural revolution took place that archeology knows as the Ubaid Period and the Bible describes as the city of Babel. The study of pottery can be fascinating, but we have much more to learn about the family of Ham next week.